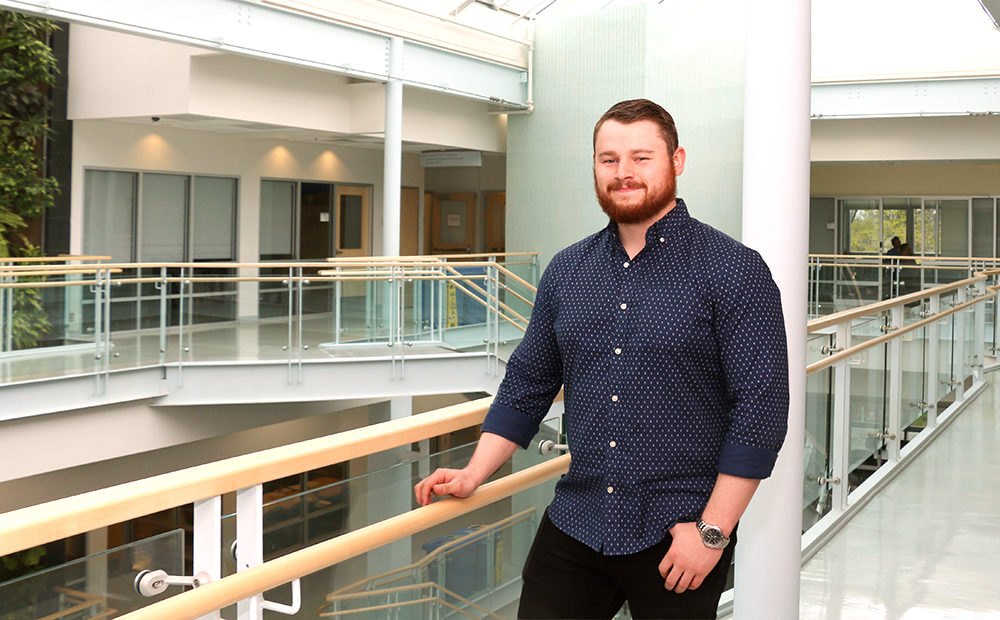 Supporting OERA goal to:
Foster research and development related to petroleum resources and their interaction with the natural and social environment, and the dissemination of that knowledge, including research work that builds geoscience knowledge about Nova Scotia’s oil and gas potential.

Time spent as a child on the beaches of his home province instilled in Chris Sangster a natural curiosity about his surroundings. “My interest in geology began when I was quite young,” he says. “My parents and I spent a lot of time exploring the beaches around Nova Scotia and collecting interesting rocks and sometimes fossils which we would come across.” Chris adds that he always wanted to learn more about the rocks and fossils they collected, making geology a perfect fit for his interests.

The opportunity to undertake his B.Sc. honors thesis with Dr. Georgia Pe-Piper led Chris to a greater understanding of the impact of mineralogy and other factors on reservoir quality. “I have always been interested in sedimentology and was drawn to combining many aspects of geology to make predictions about where oil and gas could be found. She was a big part in developing my interest in oil and gas exploration, and showed me how looking at things in a small scale can be essential in understanding the larger processes at play,” he says.

Chris credits Dr. Pe-Piper as being one of the most important people to influence his path. “She fostered my interest in research and encouraged me to always challenge any preconceptions and focus on understanding what the data was showing,” he says. “I think it’s safe to say that without her help I wouldn’t be involved in this type of research today.”

Regarding the OERA-funded project Predictive modelling of sandstone reservoir quality in the Scotian Basin which he and Dr. Pe-Piper are collaborating on, Chris says, “Predictive modeling software is a powerful tool for petroleum exploration and is beginning to be utilized more by exploration companies to varying degrees. In the coming years modeling based approaches to petroleum exploration will become more widely used as technology improves.” He notes that one area of predictive modeling where exploration remains to be done pertains to basins that have experienced abundant salt tectonism, noting work in this area has been limited by complications associated with modeling and seismic interpretation. “These conditions are present in the Scotian Basin, so this project has presented an excellent opportunity to better understand modeling in this type of environment – benefitting other attempts in the future,” he says.

Prepping OERA’s Atlantic Canada energy system model for widespread use when it launches later this year is Emma Fudge’s focus as a tester with the project.

A recent graduate of Dalhousie University’s Mechanical Engineering program, Emma became involved in the modelling project through a Renewable Energy Resources class she took with Dr. Lukas Swan during her final semester. In addition to her work testing the energy system model, Emma is currently working for Irving Shipbuilding in Halifax as a Junior Field Service Engineer.

Why did you apply for an internship at OERA?
I applied to OERA because I have an interest in the energy industry and am drawn to the innovation happening in this field, especially in renewables. OERA is driving some of this innovation and I was excited at the opportunity to be able to gain experience in both sustainable energy research and project management.